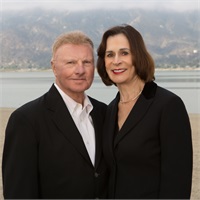 R. David Bulen, son of Erwin Bulen, a dairyman, moved to Murrieta from Escondido in the late 50’s. “Dave” wanted to do something different than feed cattle and move sprinklers. It was difficult to keep a car clean living on a ranch. It's ironic that our new Murrieta office is directly across the freeway from Erwin’s ranch that took up the area between Murrieta Hot Springs Road, Los Alamos and Jefferson. Dave loves cars and people so it was only natural his first job was selling cars. After Dave and Lynn married in 1964 Dave went to work for his father in law, Tommy Morrow, selling insurance. His only stipulation was that he needed a phone in his car. (It didn't work very well but Tommy was happy to oblige). In 1967, Dave and Lynn decided they wanted to start their own business so they purchased a Richfield Bulk plant. They grew the business rapidly and became Richfield's distributor of the year in 1968. In 1971 they sold the distributorship to tour the United States with their two daughters Lisa and Tina. They discovered in 3 months that the best weather was in their own home town, so they returned to Lake Elsinore and started R. David Bulen Water Truck Rentals. In 1974 Dave and Lynn sold the water trucks and acquired the insurance agency from Tommy, re-naming the agency to R. David Bulen Insurance. They operated out of 118 S. Main Street until they built and moved into suite 105 of the 16,000 sq. foot Centre building on W. Graham Ave. in Lake Elsinore. Dave served his community through Rotary for 20 years and looks back fondly on the days he served as president of the Lake Elsinore club.

Dave can be found in the agency a couple times a week buying lunches, boosting morale and catching up with what is going on.